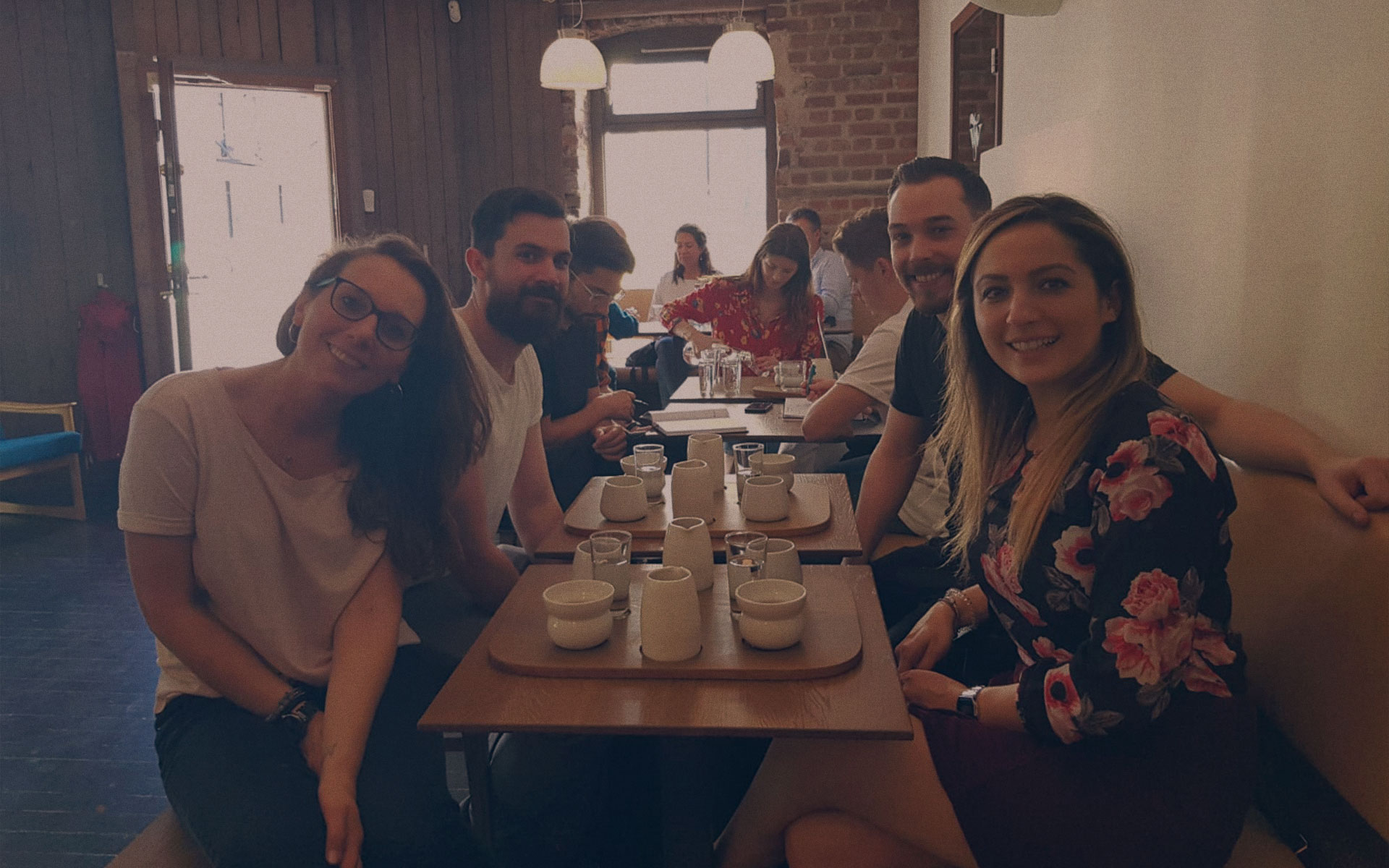 Where’s the furthest you’ve travelled for coffee and a donut (or two)? Down the road? Across the city? A couple of hours drive? What if I said these donuts and coffee were worth an international flight?

On the 19th September I started off the day at 5am by heading over to Heathrow to meet our Head of Coffee Kasia, Head Barista Mike, and fellow Senior Barista Elham where we would take a 7.30am flight to Oslo, Norway, for the sole purpose of coffee and donuts, as you do. Obviously.

But why Oslo in particular? It’s fair to say that Scandinavia is obsessed with coffee, and the coffee culture itself. In a 2013 report, Norway is the highest consumer of coffee in the world, getting through an average of 7kgs of coffee per person, per year. Who was second you may be wondering? Their neighbour, Finland. The obsession they have with this brown liquid is contagious. You wake up, have a coffee, midway through the morning you may as well have another, one more with lunch is a must, and best of have a couple more just to keep you strong through the afternoon, then there’s obviously that post work coffee catch up with have with a friend I guess. Sounds like perfection. Granted a lot of this comes down to a high tax rate on alcohol which stems from a period of prohibition that hit the country for a decade starting in 1917, which, even now, has alcohol prices sitting rather high meaning coffee is the social drink of choice.

But the coffee itself is something to write home about. While typically, in specialty coffee, we opt for a medium roast over a dark roast, in Scandinavia, they go light, with Oslo in particular, the lightest. A joke shared by Nordic roasters is that coffee in Oslo goes straight from the farm to the grinder without touching the roaster. That’s a light roasted coffee. For those familiar with roasting, typically Nordic style coffee will barely hit first crack before the roast is complete. What this does it fill the cup with bright, more acidic flavours, really showcasing the fruity and floral notes of the coffee with a very low level of bitterness.

After a short 2-hour flight and a half hour train ride we’d made it to Oslo. First stop? Talor&Jørgen. Donuts. I can’t describe the sense of glee that overtook the four of us as we turned a corner and saw the neon lights that lit up the storefront. I love donuts, just baked goods in general, so this place is the Holy Grail.  These guys had the social media page to beat, and that was all the hype we needed going into this place. As we walked to the window we were met by a collection of 12 different donuts. Every part of my being wanted me to buy them all, as you would. Lemon meringue, chocolate, raspberry sugar, cinnamon. I had to start the day off strong and go for the good old Scandinavian Diam Bar donut, accompanied by a flat white. This could well have been the greatest breakfast I’ve had. The coffee, which they roast on site at the back of their tiny store was exactly what you’d expect from the previously mentioned Nordic coffee. A sweet and fruity espresso that punched through the milk, leaving no sense of bitterness. A delight, some may say. To add that final touch they were served in lovely little homely ceramic cups. We all agreed that if we headed back to the airport at this point, it would’ve been worth it. But that was not the case. Onwards.

So we’ve done the donuts, let’s talk coffee, and when in Oslo, there’s only really one place to go, Tim Wendelboe. Tim Wendelboe, the man, is a universally recognisable name in the world of coffee and coffee roasting especially. He has ranked in the top two during the Norwegian Barista of the Year four times, World Barista of the Year three times, has been the Nordic Roaster of the Year six times and is up there with one of the top roasters in the world. With all of these accomplishments in mind, expectations were high. The store itself was quite the walk away from the city centre, which was rather enjoyable, to be honest, located on the corner of a quiet street, it was everything you’d expect from a Scandinavian coffee shop, wooden, clean and simplistic. Beautiful. The barista at Talor&Jørgen recommended we tried the taster set. The taster set was a four of their filter coffees from four different origins split between the four of us. Each coffee was delivered on a specially designed wooden tray holding ceramic cups designed to hold filter coffee, having a larger surface area to cool the coffee down quicker. Every one of these coffees was incredible, notably the Ethiopian Geisha. Along with the coffees, what really impressed me was the detailed knowledge the baristas shared as they brought each brew over. They’d not just tell us the origin and species, but the region of the country, the altitude, the name of the farm and farmer themselves. It added so much to that sense of the journey from farm to cup, they spoke about the relationship Tim Wendelboe had with the farmers, commenting on the roast profile and what flavour notes were highlighted, it became more of an educational experience, and left you with a feeling that each of these coffees were special. I would recommend this to anyone visiting Oslo as a must, this won’t be my last visit to Tim’s.

We spent the rest of our day strolling through Oslo, considering this the capital city of Norway, I’ve never seen such a calm and peaceful city. Everyone was extremely polite and happy to help with anything, including how to pay for things by card, which we all would fall victim to. I recommend Olso to those who both love coffee and the coffee culture and to those who are looking to relax. I can’t wait to head back. I think I’ve found my go-to coffee vacation spot.